Lyocell is eco-friendly, made from wood pulp derived from sustainably harvested forests. Because of its effective moisture wicking, Lyocell supports the natural ability of the skin to act as a protective shell to regulate body temperature and maintain water balance, keeping your skin cool and dry.

Lyocell fibers are also gentle on the skin. It is the combination of the silky-smooth surface of Lyocell and excellent moisture absorption that makes lyocell textiles feel so soft and pleasant. Lyocell is hypoallergenic, machine washable and dryable and is wrinkle resistant.

The cooling pack is filled with a non-toxic gel that draws heat out of the skin, providing temporary relief from hot flashes. When the flash passes, just remove the scarf and it will cool off again – ready to relieve the next hot flash. The flexible cover can be wiped clean when needed. The pack can be used again and again. It works at room temperature, but can also be refrigerated before use to combat severe flashes. 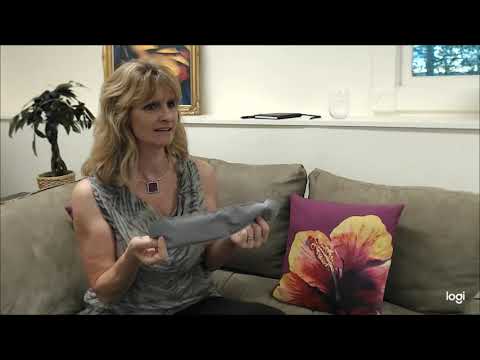 Ah, to be a woman of a certain age…

The first time I experienced a hot flash, I thought I was coming down with something, until reality set in and I realized I had officially become “a woman of a certain age.” Prior to that day, I viewed these instant onset heatwaves as merely a middle-aged-woman-joke that spurred a hysterical Broadway show and an even more hilarious Wanda Sykes comedy routine. But when you experience them firsthand, they are not funny.

In fact, hot flashes are uncomfortable, stressful and embarrassing. They hit all too often and at inconvenient times; while at work, shopping, on a bus or out to dinner. I felt so self-conscious frantically fanning myself, stripping off a layer of clothing or running to the restroom to splash water on my neck and face… so I visited my doctor.

My doctor told me these mild to moderate “hot flushes”, as she delicately called them, are normal and experienced by 80% of the female population between the ages of 45-55. She said I should be thankful that my flushes were so mild, only about 10-15 times a day. I should figure out how to cope with this normal phenomenon. She said they did not warrant hormone therapy, and even if they did, hormones would reduce, but not eliminate, menopausal hot flashes. Be happy they are not worse. She gave me the typical hot flash relief recommendations: dress in layers, carry a handheld fan, use ice packs wrapped in a towel to press on my hot skin.

I work in an office. It’s so obvious when I fan myself in a meeting and embarrassing when people realize it is that “middle-aged-woman issue”… She is going through “The Change”. I don’t have ice packs handy when I am driving. It’s inconvenient to fan and hold packs when I am busy in the house.

So, I decided to do something about it. I invented the Cool Me Scarf. The Cool Me Scarf conceals a cooling pack that is gently refreshing. The scarf’s fabric, with its luxurious silky feel, drapes fashionably with any outfit and discreetly offers gentle cooling.

At the first sign of the onset of your personal, tropical heatwave, pull the scarf out of your purse or desk drawer and drape it around the back of your neck. Use anywhere for a discreet, soothing cool. For warm climates (air temp over 75 degrees), or hotter flashes, the cooling pack can be refrigerated before use.